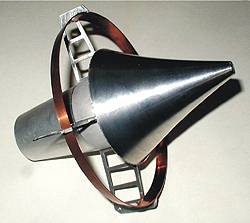 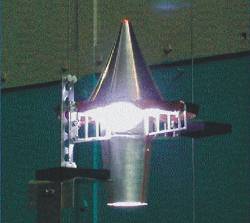 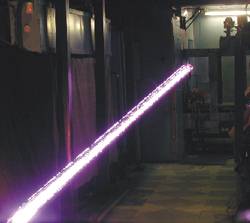 Laser jet engines (LJE) present a new class of engines suitable for application in design of such vehicles as high-altitude robot planes, carrier rockets and spacecrafts. LJE can be used to transfer a spacecraft from a low near-earth orbit onto a geostationary orbit, to correct the spacecraft orbit and its orientation.

An idea to apply the laser propulsion in aircraft is under development since the early 70th. The main peculiarity and one of the advantages of the laser propulsion as compared to the conventional methods of jet propulsion generation is that it is drawn owing to energy of a distant source. This results in small weight and allows one to increase considerably the useful carrying capacity of a vehicle.

The laser propulsion features a high specific impulse as compared with the conventional jet propulsion at sufficiently high values of propulsion.

Demonstration experiments with the prototype with total weight of 150 g moving along an inclined path showed the following performances:

At present the following works are conducted in NII OEP: